From Dynamo
Jump to navigation Jump to search

This walkthrough shows how to reuse the geometric computations performed on a single model onto a larger set of models.

We can use a synthetic tomogram containing different tubular structures. In this catalogue, we open the tomogram with dtmslice, and then define a filament model following the usual procedure, so that we end up with a single model containing a set on points.

We will now define a workflow, i.e., a method of converting points into crop_points.

We open the workflow editor of the active model, and start operating the steps, checking graphically the result of each parameter selection. We create first a backbone, selecting the interval between backbone elements. 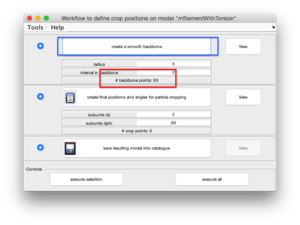 Creation of the backbone

We then proceed for the next step: selection of the interval (in pixels) between two consecutive crop points. 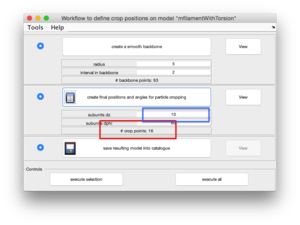 Selection of interval between crop points

And check again the results:

... not forgetting to save the model into the catalogue. The model will contain the generated crop_points and also the parameter values used to generate them. 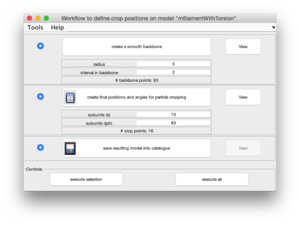 Now can save the workflow itself, probably providing first a different name than the default. 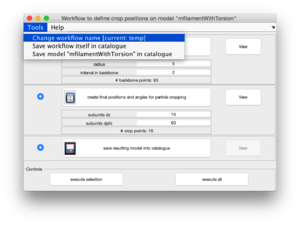 Provide a name for the workflow. It will be saved later into the catalogue

Once the workflow defined on the first model is defined we can move to a different filament and pick its extremal points with controls [1] and [2]: 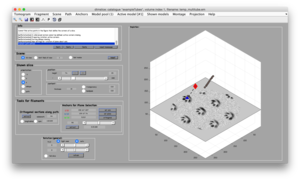 Next filament is chosen

and then define a new filament model, and click on their points. But in this case, afterwards we save the model without further edition

and move to the generation of a further filament model

Now, the catalogue should see three models inside this tomogram entry. 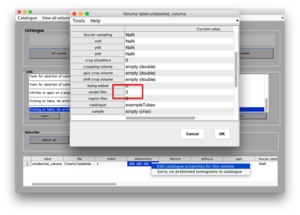 If we open the tomogram with the volume list manager, we will get a list of those models. We should see that the first we created does contain some crop points, but the other two don't.

Then we can pick those filaments that don't contain crop points and select a previously stored workflow to be applied on them.

We select the workflow that we previously created. It will loop on the selected models, and update them in disk. The Catalogue window should get updated to reflect the new crop points introduced into the models.